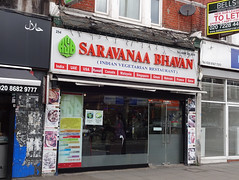 100% vegetarian restaurant in Tooting, part of an international chain. It has several other branches in London including one in East Ham, one in Ilford, and one in Wembley.

secretlondon visited in March 2016 and had the "south Indian meal" (£8) photo. This consisted of sweet, chappathi/poori with side dish, rice, sambar, rasam, special kuzambu, two vegetable curries, raitha, curd (yoghurt), appalam and pickle. It was basically a thali served on a silver tray. They do two others — a north Indian thali and a business meal. Their menu has things like dosas and a Jain section with no root vegetables.

secretlondon's verdict: I thought this was rather nice and I'd like to go back and try other things.