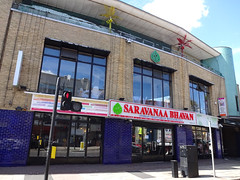 Vegetarian Indian restaurant in Ilford, part of an international chain with several London branches including one in East Ham and one in Tooting. They specialise in South Indian dishes such as dosa, idli, and vada.

Entry is into a spacious lobby-like area, with a shrine to Ganesha in the centre. Behind this is a takeaway counter, and seating is off to the sides. A central light well above gives a glimpse of more seating on the first floor.

The decor is quite nice, in brown, cream, and gold, though the sparkly black floor tiles and the hazard warning tape on the step up to the dais seating are a little incongruous. A hand-washing station sits to one side, and metal jugs of tap water are on the tables along with matching metal cups.

Kake visited on a Tuesday lunchtime in August 2016. There were about half a dozen other customers when I arrived shortly after noon, and more like two dozen when I left an hour later. Music was playing, not too loud.

Palak dosa (£4.50) photo had a nicely savoury flavour, with a tang of fermented sourness. There was a good balance of spinach to dosa. It had some crispness around the edges, but was very soggy in the centre; however, this is always going to be hard to avoid with a watery vegetable like spinach. The sauces on the side were fine, with the fresh tomato one perhaps being the standout.

Masala tea (£1.25) came overflowing into its saucer (a "full tea") with a little dome of froth on top photo. I was offered the option of having this pre-sweetened or with sugar on the side.

Service was efficient albeit taciturn. No service charge was added to the bill.

Accessibility: No steps to get in, but much of the seating is up one step on a dais or even upstairs. Level access to some of the seating, the takeaway counter, and the hand-washing area. Toilets are up a flight of steps with a sturdy handrail and two landings partway up.