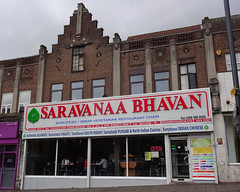 100% vegetarian restaurant in Wembley, part of an international chain. It has several other branches in London including one in East Ham and one in Tooting.

secretlondon visited one Friday night in September 2016. This restaurant is targeted at Indian diaspora with a different menu and spice level from the more common English curry house. The menu is online but isn't exactly the same as the one in the restaurant. They do South Indian dosas, Indian-Chinese, Jain food without root vegetables and others.

The menu had 3 thalis — South Indian, North Indian and Gujarati. I asked for the Gujarati but only the North Indian was available. It cost £8 and came with a peppery soup, followed by a large tray with fried rice, three puris, thick daal, raita, salad, an Indianified spring roll, a popadom, paneer in a rich tomato sauce, chickpea curry, potato curry and a piece of gulab jamun sweet. I liked the paneer and pretty much everything apart from the spring roll which I found too dry. I've been disappointed by tasteless Anglicised curry recently and this wasn't that. The soup was pretty peppery and might have been too much for someone who didn't like hot food.

They are not licensed and I have no idea if you can BYO. They have a separate dessert menu but I didn't try any. They started clearing up at 10pm, putting chairs on tables. They asked me at 10:15 if I was planning on ordering anything else as the kitchen was closing. I didn't feel I need to rush out though.

Accessibility: I think it is all on one level and from what I remember there was a single female toilet and one marked disabled which I didn't examine. I obviously didn't go in the gents. They have highchairs for small children.