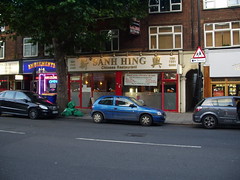 Used to be a Chinese restaurant on Tower Bridge Road; now closed and turned into Super Nova, SE1 4TP (though it's probably the same people since the menu didn't really change).

They used to offer an all-you-can-eat buffet.

They have a separate vegetarian menu including a large selection of mock meat. I didn't ask whether they understand vegans.

Kake and Bob tried out the delivery option on a Saturday evening in February 2007. Ordered and paid online, no problems with the delivery.

We started with mixed starters: £4 per person. Each person gets 2 spare ribs, 1 skewer of chicken satay, 4 pieces of sesame prawn toast, 1 spring roll, and crispy seaweed. Spring rolls a bit light on filling but not overly greasy. Main courses: sea-spiced aubergine was a little sweeter than I'm used to, and seemed to have no chilli heat whatsoever. Barbecue gluten pork (mock meat) Cantonese style wasn't unpleasant, but didn't seem to have much flavour over mock meat straight out of the tin. They also hadn't bothered to cut it into pieces suitable for eating with chopsticks.

Overall, I think my verdict is “competent and inexpensive, but unexciting”. I'll order from here again, since I'd like to give some of the other mock meat dishes a go. --Kake