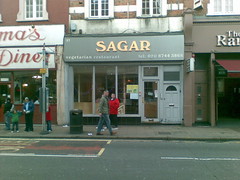 Sagar was a South Indian vegetarian restaurant in Twickenham, part of a small chain. It has now closed. As of early 2012, the premises are occupied by another Indian restaurant called Atithi.

The information below is retained for people who want to know what it used to be like as Sagar.

South Indian vegetarian restaurant in Twickenham, part of a small chain that also has branches in Hammersmith, in Fitzrovia, and in Covent Garden.

Note: Although there were reports in early 2010 that this branch of Sagar was no longer vegetarian, as of May 2011 it most certainly is (see menu photos linked below), and also advertises vegan, nut free, wheat free, and onion and garlic free food.

bob visited in February 2008. While vegetarian, the food was quite tasty. There were several types of thali based on regions.