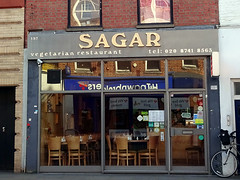 South Indian vegetarian restaurant on King Street in Hammersmith, part of a small chain that also has branches in Fitzrovia and in Covent Garden (their Twickenham branch has closed).

itsbruce visited the King Street branch on a Sunday evening in September 2011 with a group of vegetarian cyclists. Service was mostly efficient and friendly (although a glass of tap water requested by itsbruce never appeared); the staff coped well with orders (and group members) arriving out of sequence and were very helpful.

The sev puri was good enough to rival any of the fine puri houses over on Drummond Street; the puffed pastry biscuits were firm but not brittle and the dish was vigorously flavoured (and the portion was ample).

Several of the group ordered varieties of dosa and it was nice to see that the crepes themselves came in different styles; James's mysore masala dosa, for example, was deep brown and folded in a triangle, while itsbruce's onion rava masala dosa was a honey coloured semi-circle with a caramelised texture, brittle enough to snap off in chunks but not so fragile as to shatter into useless shards. The filling was chunky, subtly flavoured and very good.

Payasim came in a small portion (mercifully, since the other courses had been quite filling); it was creamy but not heavy, with the flavours very nicely judged and the dish contained just a few sultanas, which absorbed and concentrated the flavours to create a lovely explosion on the tongue when eaten.

Portions were large enough that everybody was happy to share and sample. None of the dishes were less than good but chilli fans should know that most dishes are lightly spiced, although you can ask them to turn up the heat. The final bill for seven people (none of whom ordered alcohol) was £153.

itsbruce's verdict: this is good quality Indian veggie food and I will want to go back to try some of the other options.