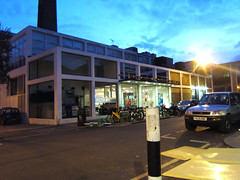 Arts complex near the river in Hammersmith.

Inside are house several studio stages which are used for theatre performances, as well as for filming television productions. There is also a dedicated cinema, specialising in double-bills, particularly of art-house films, and occasionally running short themed film seasons.

There is a cafe and bar in the building.