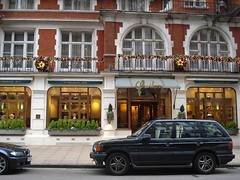 Note: Quilon closed for renovations in early 2012 but is now open again.

In the 2007 Good Curry Guide. It's on the expensive side; as of January 2008 the sample menu on the Quilon website had starters costing between £6.50 (Quilon salad) and £12.50 (fisherman's basket - deep-fried battered seafood served in a potato basket); mains between £17 (crisp-fried squid stuffed with prawns and spinach) and £25 (mixed seafood platter; or lobster with mango and ginger); and vegetarian dishes around £9 (e.g. crispy okra; aubergine two ways; or coconut with asparagus and beans). It received a Michelin star in 2008.

Howler on Chowhound recommends ordering the vegetarian thali, and notes that the mashed aubergine is particularly good (ask to have it included in the thali if it's not already there).