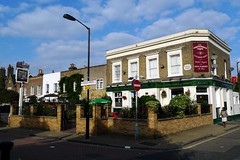 A traditional Irish pub in Nunhead.

Inside this is a fairly spacious pub split into three main areas of seating with the bar in the centre, not modern but well-tended. Chandelier-style lighting hangs from the ceiling, and pint glasses are displayed on a wrought-iron gantry above the bar. There are at least two dartboards, and a glass trophy cabinet is mounted on the side wall.

There's a few picnic benches out the front, a decent sized beer garden out the back with tables, and a separate room with pool table. Several large flatscreens show the sport with the sound on (football on Ewan's May 2008 visit, golf on Kake's July 2011 visit). Bar staff are friendly and the regulars (for they clearly are) don't seem threatening.

This former Courage pub still has Courage Best on tap (£1.05/half as of May 2008), but no ales despite the presence of at least five handpulls. Good range of spirits (several different brandies are available, for example), and the usual bar snacks. On Kake's July 2011 visit, there were filled rolls on display behind the bar, and a pint of lime and soda was £1.20.

A commenter known as "SOgGySOCkS" tells us: "This was always 'THE PYRO'. I was left outside there occasionally with an arrowroot biscuit & lemonade. An old bloke used to play a mandoline outside and sing rude songs. That was about 1938.'

Accessibility: Step-free to get in, to the bar, to the main seating areas, and to the toilets. Not sure about access to the back beer garden or the pool room.