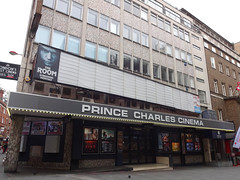 Cheap tickets (from £7.50 for adults as of October 2016), and even cheaper for members. They are a second-run cinema, so show films which are no longer on their first release to cinemas, which helps them keep their overheads down. However, the selection is generally very good and mostly films which have only recently stopped screening elsewhere, rather than being repertory per se (although the odd classic slips in).

They also host occasional programmes of themed films as 'festivals', as well as the sing-a-long films (e.g. The Sound of Music). See the website for lots more details and listings.