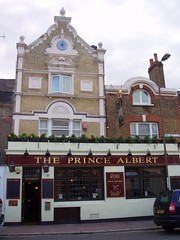 The Prince Albert was a locals' pub in Greenwich. The premises changed hands around the beginning of 2010, and the Greenwich Phantom reported in April that year that it was reopening as a gastropub called the Prince of Greenwich. This did indeed happen; see photo from March 2014.

The information below is retained for people who want to know what it used to be like as the Prince Albert.

bob visited on a Sunday afternoon in April 2009. I had a pretty decent pint of Sharp's Cornish Coaster for £3. They also had Courage Directors and Tim Taylor Landlord on. Music and a TV were playing quietly in the background. The TV was possibly getting slightly louder as a match was about to start. They had roast potatoes, crisps, cheese and biscuits on the bar for free.

According to their website as of April 2009, they serve food noon-3pm Monday-Friday, with bar snacks all day on Saturdays and the free snacky things mentioned above from lunchtime on Sundays until they run out.

Accessibility: No steps to get in. Ladies' was down at least one step. I suspect the gents' was upstairs.