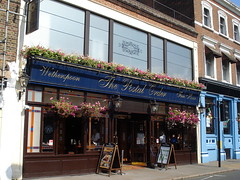 The Postal Order was a Wetherspoons pub in Crystal Palace. It closed down in Spring 2021 when the company decided not to renew the lease.

It's a fairly standard Wetherspoons: patterned carpet, low ceiling, a couple of booths at the back, and local history displays on the walls.

Kake visited on a Wednesday afternoon in July 2014. It was fairly empty when I arrived around 4pm, but by 5:30pm there were a fair few people in and a very lively buzz of conversation (but still plenty of free tables). As is usual with Wetherspoons, no music was playing. Service was friendly and helpful. A pint of lime and soda was 65p.

Food is served all day. In July 2014, Kake's starter portion of spicy coated king prawns (£3.90 for six) had a good, crisp batter with no traces of grease, and the prawns themselves were perfectly cooked. (I've had this dish in several Wetherspoonses, and this version was probably the best.)

Accessibility: Step-free to get in, step-free throughout, and there's an accessible toilet on the ground floor (other toilets are up two or three flights of stairs).