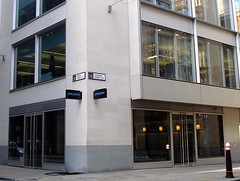 Dim sum restaurant in St Paul's, part of a small "modern-style" chain with branches on Goodge Street and in Soho, among other places.

Kake and Su-Lin visited on a Thursday evening in March 2011. We hadn't booked, and there were already quite a few people in, but there was no problem finding us a table.

Unfortunately, in contrast to Kake's previous experience at their Goodge Street location, nothing we ordered was very good, and some of it was actively bad. Even setting quality aside, the food was a bit odd for a dim sum place — very few pork options, no chicken/mushrooms in the lotus leaf rice, and as Su-Lin points out in her review (linked below), there seemed to be carrot in everything.

The menu was more restricted than at the other location, so we ended up mostly with various steamed dumplings. These were all over-steamed, leaving the wrappers mushy, sticky, and rather structurally unsound. The worst of these was the golden vegetable dumplings (£3.69 for three) photo — the turmeric in the wrapper was overwhelmingly woody, and neither of us could bring ourselves to eat the last one. The best of a bad lot was likely the chicken and prawn dumplings (£4) photo; the red cabbage juice used to give a purple colour to the wrappers was attractive and not intrusive, and the filling was quite juicy.

Crispy prawn balls (£4) photo were fried competently, but the filling was a bit salty. Fish and black pepper griddled dumplings (£3.59) photo were OK, though the filling was quite dry. Perhaps the best part of the meal was the mango pudding with coconut cream (£3.19) photo; the unsweetened coconut cream was a nice foil to the sweetness of the mango.

With a 12.5% service charge auto-added to our bill, and a glass of tea apiece, we paid £20/head, which is quite a lot of money for such a low standard of food.

Accessibility: Step-free to get in, to get to most of the seating area, and to get to the toilets (including a dedicated accessible one). Some of the seating is on a dais, up a few steps, but there are plenty of other tables at ground level.