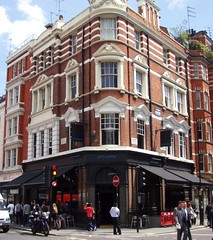 This dim sum restaurant on Goodge Street closed in 2012. It is set to become the Newman Street Tavern (earlier reports link this to the Truffle Hunting restaurant consultancy firm, though we aren't sure if there's still a connection).

Dim sum restaurant on Goodge Street, part of a small "modern-style" chain with branches near St Paul's Cathedral and in Soho, among other places.

Housed in a former pub premises, this chain restaurant was empty at 12:30pm even on a Friday, but soon filled up with people. It appears to have more tables upstairs for diners, as the ground floor room is dominated by two or three large round tables in the middle, with a few other smaller tables around the side. At the back of the room is the kitchen area, where food is delivered to the waiting staff. Music is played, initially quite loudly, but when the place started filling up, it was turned down a little.

The dim sum menu is fairly lengthy and has a good number of vegetarian options, as well as a rather idiosyncratic pricing which goes up in small increments. Despite our group's initial preconception about this chain, the food turned out to be perfectly competent, with even a few stand-out dishes.

Char sui buns (£3.49) were good and not too heavy, while baked pork puffs (£3.19) and sweet beetroot puffs (£3) were tasty photo of puffs. Steamed dumplings (£3) photo, of which there are over 10 varieties on the menu, were served in baskets with stickers on the side to indicate the contents, which was a nice touch. Pak choy in ginger and garlic sauce (£3.12) was simple but lovely. Highlights were the crispy asparagus (£4) photo, and particularly the crispy aubergine (£4) photo, from the "signature dishes" section of the menu, which were simple fried marinated chunks of aubergine, but disappeared almost as soon as the plate was put down. Likewise, the honey-glazed ribs (£6), which were in a "chef's special" section of the menu that isn't on the website, were judged to be the best that our diners had eaten, with the meat falling easily off the bone.

The tea (ours was organic silver needle white tea, £2.95) was rather oddly served in a tall glass, with a long spoon to fetch out the infuser. A teapot would have been preferable. There are also bottled beers for around the same price.

Ewan's verdict: We had 14 dishes amongst five people, and ended up paying £14 each. The food was good enough, and the vegetarian selection strong enough, that I would consider returning, especially given that this area (like many of those served by the Ping Pong chain) isn't particularly strong on dim sum options.