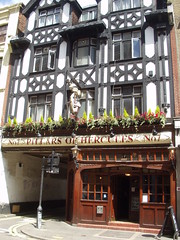 The Pillars of Hercules was a pub in Soho, on the corner of Greek Street and Manette Street. It closed in early 2018. Later the same year a cocktail bar called Hercules opened in the premises.

Pub in Soho, on the corner of Greek Street and Manette Street.

It was previously run by the Faucet Inn pub company, but was sold in early 2018. Initial reports were that it would close permanently photo of sign, but it was later reported to be reopening in April photo of sign.

As of May 2018, it's unclear whether or not it's reopened yet. In any case, the information below predates the change of ownership, and so some or all of it may be out of date.

It's fairly small so can get quite crowded post-work, though it empties out significantly later on; Kake was here with a group on a Monday night and upon leaving at 9pm the place was almost empty. John arrived at 9pm on a Wednesday evening, and there was a group of people near the door but several empty tables at the back. There are seating areas at the front and rear, both up a few steps, and a few tables by the door and behind the bar, on the same level as the bar.

There are generally three or four Adnams' ales on their six handpulls (e.g. Broadside, Regatta, and East Green in June 2008), plus one or two others (e.g. Thwaite's Wainwright in June 2009). On a February 2010 visit shortly after a refurb, there were three ales, all from the Westerham brewery and all well-kept.

There have previously been concerns about the noise level of the music, but this seems to have been sorted out — when DrHyde visited in January 2010 there was bleepy music playing, but it was playing quietly. There has in the past been an eccentric DJ on Wednesday evenings, but again this seems to no longer be the case. The pub doesn't have a TV.

Accessibility: It isn't very accessible, really. A step to get in, very little room to manoeuvre, and the toilets are down a narrow staircase (although there is a handrail).