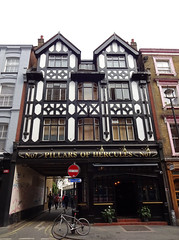 Bar on Greek Street in Soho, in the old premises of the Pillars of Hercules pub.

It's a long, narrow space, stretching back from the street. On entry, there's a cosy little banquette seating area up a couple of steps on the left, and high stool seating on the right. A copper-topped bar is beyond, with a couple of tall stools lined up along it and a few more in the tiny alcoves opposite. Right at the back is another banquette area, again up a couple of steps. A small sofa is tucked in just at the base of this, completing the seating arrangements.

Lighting is dim and colours are dark and muted, though a touch of relief is provided by the stained glass ceiling mural at the back, showing Arnold Schwarzenegger as Hercules. The patterned carpet on the floor of the banquette areas gives a nod to its past, but the new management certainly seem to be positioning it as a bar rather than a pub.

Kake visited on a Monday afternoon in September 2018. There were just two other customers when I arrived around 2:15pm, apparently friends of the bartender. Music was playing, not too loud.

The handpumps have all been removed, and the bar now has just three keg taps; two of them clipped on our visit, for Asahi and Guinness. A pint of lime and soda was £2.

Kake's verdict: A decent enough place for an afternoon drink. I'd like to come back and try the interesting-looking bar snacks and cocktails.

Accessibility: Two steps in, no handrail. A couple more steps to almost all of the non-high stool seating. Toilets are down a flight of stairs in the basement.