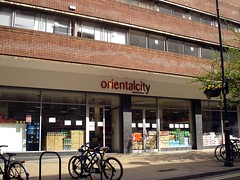 This was the new home of the big supermarket that used to be in Oriental City. However, as of late 2009 it's turned into a Costcutter photo. It still has "Oriental Supermarket" written on the front, and it still sells some Asian goods, but the selection is very thin.

Note: as of late 2013, according to fatgayvegan it has improved!

The information below is retained for people who want to know some of its history.

This is the new home of the big supermarket that used to be in Oriental City; it now sits at the bottom end of Queensway in Bayswater, across the road from Queensway Station.

Kake first visited in April 2009. They no longer had the fish counter they used to have in Oriental City, but they did still offer a certain amount of fresh and frozen meat; a sign in the window advertised "halal meat, pork, frozen spare parts, thinly sliced meat for hotpot". They also had a small selection of vegetables, plus fresh and frozen groceries like konnyaku, tofu products, frozen dumplings, frozen parathas, and so on. Other things on offer included a selection of dried noodles, teas, sauces, vinegars, and interesting things in jars and tins.

The management changed some time in mid-2009, and the range of stock decreased further. As of Kake's September 2009 visit, they'd moved towards offering more chilled drinks and (Western) snacks and fewer Asian groceries, though they did still have various noodles, vinegars, vegetables, etc. Sadly, it seems that this place is not only a shadow of its former self, but a shadow of a shadow of its former self. Try Impress Food up the road instead.

Comment added by Anonymous: I went there just this week and while variety of the more "Asian" stuff are not as wide as I'd like, they do have a meat and fish and whatnot counter open now. Plus, there were some things I was looking for that I thought might've been there before (though I wasn't sure), and I managed to speak to the guy who owns it and he understood perfectly what I meant and offered to try to bring the product(s) in within the next couple of weeks. Pretty good in that sense, I gotta say.