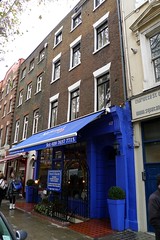 Navarro's was a Spanish/tapas restaurant of long standing, located just off Goodge Street in Fitzrovia. It has now closed. According to Google Street View, it was closed and boarded up by November 2020.

A reception desk with a large old-fashioned reservation book is to one side as you enter, with a glass-fronted dessert counter beyond; the actual restaurant seating is in a room at the back and in a basement downstairs. The decor (in the basement at least) is quite ornate; handpainted flowers adorn the tables and chairs, and intricately-decorated tiles line the walls photo.

Kake, Sarah, Ewan, and Kat visited on a Tuesday early evening in November 2009, as part of a tapas crawl. Although the place was empty when we arrived shortly after 6pm, they seated us right next to the toilets in the basement, lending a charming aroma of Toilet Duck to our stay.

They bill themselves as a tapas bar, but they do seem to be more of a restaurant. We were told that their license doesn't allow them to serve alcohol without food, and even though we'd made it clear at the front desk that we weren't intending to have a full meal, our waitress seemed a little confused that we only wanted three tapas to go with our sherry.

Champinones al ajillo (garlic mushrooms; £5) photo were pleasant enough; a little undercooked for Kake's taste (this is more of a personal preference than a complaint), but Ewan liked them a lot.

Pulpo a la gallega (octopus with boiled potatoes, paprika, and sea salt; £7) photo had a decent texture, and was a very generous portion, but the seasoning was a little uneven; the pieces underneath had very little flavour while the pieces on the top layer were quite salty. Sarah was particularly underwhelmed by this one.

Croquetas de jamón y pollo (ham and chicken croquettes; £5.45) photo were fairly average; the coating was a little too thick and the filling not quite creamy enough for Kake's liking. (Square Meal says the vegetarian croquetas are better, though.)

Tap water was brought promptly on request. We also had a bottle of sherry (Valdespino Manzanilla Deliciosa; £14.50 for 375ml), which was easy enough to select as they only had two sherries on offer. A 10% service charge was added to the bill.

Accessibility: Some of the seating is in the basement, which is down a couple of half-flights of stairs. The toilets are also down there — not sure if there are toilets on the ground floor.