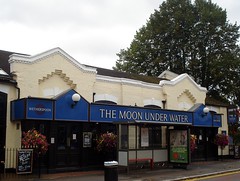 Unlike many Wetherspoons pubs, this one wasn't converted from a shop, nor was it converted from some grand building such as a bank or cinema. Instead, according to the Pubs Galore comments linked below, it was previously a Greek restaurant and a dairy (we're not sure if it was both of these at the same time).

The ceiling is high and sloped, with beams crisscrossing past a display of old books and things (too high up for anyone to reach; these are just for show). It's essentially one large room, though there's an area set off by pillars towards the back, plus a small glass-roofed conservatory to one side. There are a couple of booths at one end, some sofas, some high chairs and tables, and some normal chairs and tables. There's at least one flatscreen.

Kake visited on a Tuesday lunchtime in September 2011. There were six real ales available, three of them interesting: Ruddles Best, Courage Directors, Abbot Ale, Oxfordshire Ales Marshmellow, Nethergate Old Growler, and Firestone Walker Red Nectar Ale; the latter of these being brewed at the Shepherd Neame brewery by Matthew Brynildson of Firestone Walker, an American brewery. Also on handpump were Westons Vintage Organic cider and Broadoak Premium Perry, with Westons Marcle Hill cider marked as "coming soon". Despite this richness of choice, it was too early for beer for me, so I had a pint of lime and soda at a very reasonable 50p.

There were quite a few people in when I arrived at 2pm, though half of them seemed to have been in for lunch, and left soon after. There was no music playing, but plenty of conversation. The flatscreen was switched off.

According to the 2009 Good Beer Guide, there's a patio to the rear, and food served from breakfast until 10pm.

Accessibility: Steps at front entrance, but there's a side entrance with a textured metal ramp. Stepfree to bar, toilets (including a RADAR-locked accessible one), and most if not all of the seating once you're in.