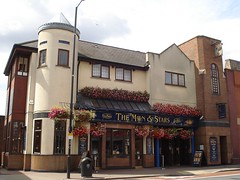 Wetherspoons pub on the High Street in Penge.

It's quite big, but has small booths at the side (some of them with books!) for a bit of privacy. A large lion statue dominates the entry. There are three banks of handpumps on the bar, each with five or six pumps.

Kake and friends first visited on a Friday afternoon during the Spring 2007 Wetherspoons beer festival. All the ales we wanted to try were on (although when one ran out they didn't turn the label on the pump round, which was a little confusing), and the barstaff were very patient when asked to pour nine 1/3-pints per round. Service was very friendly. The usual Wetherspoons daytime drinkers were in evidence, but the atmosphere wasn't unpleasant. Two of us went for the "two main meals for £6" offer, both choosing lasagne, which was excellent for the price.)

Kake visited again on a Tuesday lunchtime in August 2013. There were plenty of interesting real ales available, as well as interesting real ciders. A pint of lime and soda was a pleasingly cheap 65p. Five bean chilli (£4.79) photo was OK, though the flavour was more acidically tomatoey than versions I've had in other Wetherspoons, and not in a good way.

Accessibility: No steps to get in. Stepfree to the bar, some of the seating, and the toilets, including an accessible one. However, much of the seating (including all of the area where children are permitted) is on a dais, up three steps with a handrail.