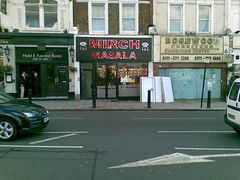 This was a branch of the Mirch Masala chain, located near Kensington (Olympia) Station. At some point in 2008 or 2009 it left the chain and renamed itself to Miran Masala photo.

The information below is retained for people who want to know what it was like in its Mirch Masala incarnation.

bob and Dean visited on a Wednesday lunchtime in October 2007. The food was as good as we've had at other Mirch Masala branches. They were a little bit confused about punters turning up at 12:00 despite the (hard to spot) sign listing that as the opening time; although they were very apologetic about the delay. Not all the staff had turned up at noon.

The onion bhajia (£2) and karahi gosht (£7) were both very good. The chilli naan was a little disappointing, but the peshwari naan was very good. The poppadoms (like at all Mirch restaurants) are like wall paper paste and glue your teeth together.

No booze but you are encouraged to bring your own. Mango lassi was tasty.