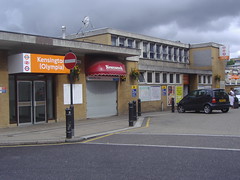 Zone 2 Tube and London Overground station on the District Line and the West London Line.

In December 2011, the District Line service to and from this station was reduced significantly. The service still runs at weekends, public holidays, and during designated special events; but weekday District Line trains are now restricted to early mornings and a couple of evening services.

This means that most weekday services are now provided by the London Overground West London Line, which runs from Willesden Junction to Clapham Junction via Shepherd's Bush, Kensington Olympia, West Brompton, and Imperial Wharf.