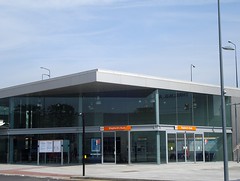 Zone 2 rail station in Shepherd's Bush, on the West London Line of the London Overground network. It opened on Sunday 28 September 2008.

It also serves Southern trains from Clapham Junction Station (known to include Brighton) and to the north, other trains from locations such as Milton Keynes.