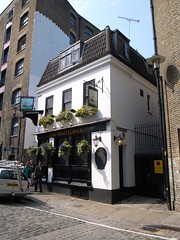 Greene King pub on the river in Rotherhithe. Cosy bar on the ground floor leading out to a enclosed wooden jetty over the river (smoking permitted).

The bar itself is fairly accessible, with just one shallow step, but there are more steps up to the jetty and the door leading out is very narrow. The ladies' and gents' loos are on the same level as the bar. Children are not allowed in the bars or on the jetty, but are welcome in the restaurant upstairs if eating.

On our first visit in May 2007, we paid £6.20 for one pint of Old Speckled Hen and one of Abbot Ale. Bob said that they were both kept reasonably well "for once" (meaning that these beers often aren't, not that this pub usually doesn't do this well!). We sat out on the jetty; there was plenty of space. On our second visit, on a Sunday afternoon in November 2007, the weather was too bad to sit outside, and the place was crowded, so we didn't stay long since we couldn't find seats. (We did note that there was a group hogging a table with barely half a pint between them; probably tourists.)