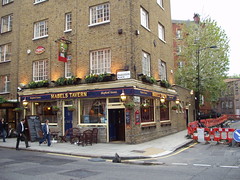 bob, elvum and Kake visited in April 2007. Five Shepherd Neame ales were available, and all five were well-kept, albeit pricey (Early Bird and Bishop's Finger both £3.05/pint; Masterbrew £2.65/pint, as of April 2007). They also had Asahi on tap (not tried).

We tried the food too. The selection was reasonable, the prices average, and the quality mediocre. A 10oz rump steak was tough and flavourless, and "ginger and lemongrass chicken strips" tasted of neither ginger, lemongrass nor chicken, and were somewhat flabby. The steak and Spitfire pie was a faux pie, with a puff pastry top but only a china dish to contain the fillings. The actual filling was very tasty, though, and even had enough pepper to satisfy bob. The steak inside was very tender. The salmon fillet was a little overpriced at £8.25 for what turned out to be essentially a posh Filet'o'Fish. Someone in the kitchen was definitely lacking inspiration, since the steak, the pie, and the salmon all came with exactly the same side dishes; mashed potato (quite competent, though Bob and elvum wished for more butter), and a rather uninspired salad with dressing (not home-made; clearly from a bottle).

We left for another pub after our meal, since it was rather too noisy for us to hear each other speak. Turning off the piped music would probably make this pub rather better.

There is some seating available on the pavement outside. Free WiFi internet access.