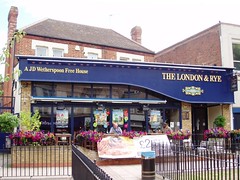 It's a pretty standard Wetherspoons shop conversion, with a low ceiling and lack of natural light. The space is broken up somewhat with pillars, however, and the tables are spaced relatively widely. A couple of tables out the front cater for smokers and those who wish to enjoy the sight of daily life along the main road in Catford.

Kake visited on a Thursday afternoon in September 2011. There were quite a few people in, and plenty of lively conversation, though the atmosphere was slightly marred by the throb of aircon or something similar. Service was efficient and friendly.

Food is served all day from the standard Wetherspoons menu.

Accessibility: No step to get in, no internal steps, accessible toilet.