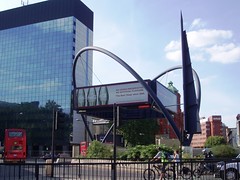 The name of a Tube and rail station as well as the street which follows the path of Clerkenwell Road eastwards to join Hackney Road. It passes through St Luke's and Shoreditch.

Auto-generated list of things on or near Old Street (view them on a map):