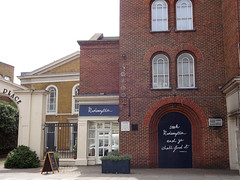 Vegan and alcohol-free restaurant and bar at the Shoreditch end of Old Street. It has another branch in Notting Hill.

The decor is simple but stylish, with black slate tiles on the floor. It seats about 30 at marble-topped tables flanked by turquoise-upholstered chairs and banquettes, plus five more on tall backless stools at a counter. Windows on three sides give contrasting views of a peaceful courtyard and the busy traffic of Old Street.

Kake visited on a Tuesday lunchtime in July 2016. Arriving at their opening time of noon, I was one of three customers, and another five arrived shortly afterwards. Dance-ish music was playing, not too loud, and at times drowned out by traffic on the busy road outside (it was a hot day, so both front and side doors were open).

I went for the sweetcorn and red pepper pancakes with guacamole, cherry tomatoes, and rocket (£9.50) photo. The pancakes were nicely crisp on the outside and soft inside. The guacamole had a nice chunky texture, but the flavour was unbalanced; totally dominated by lime. The tomatoes were fine, though not the most flavourful I've had this summer. Overall, it was nicely varied in terms of texture, even if I'm not sure all the flavours worked together.

My order was taken very quickly, and I wasn't kept waiting long for the food to arrive either. Tap water arrived on request in a decent-sized chilled bottle (probably about 750ml). A 12.5% service charge was added to the bill.

They have free WiFi, with the network name and password up on the wall.

Accessibility: A small step up and immediately down again to get in. No steps to the toilet, but the cubicle is a bit of a squeeze.