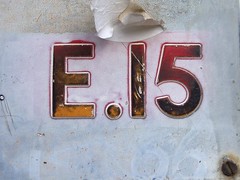 East London postal district mostly covering Stratford with parts of West Ham and Plaistow to the south, in the London Borough of Newham (though with bits of Waltham Forest, Hackney and Tower Hamlets).

Auto-generated list of things in E15 (view them on a map):