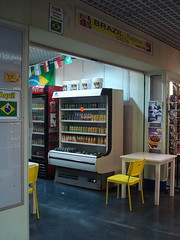 It's located in Market Village, which is accessed via the Stratford Centre (the shopping centre just across the road from the main entrance to Stratford Station, in the direction away from Westfield).

The menu photo as of April 2014 focuses on juices (e.g. passion fruit, guava, cashew, and acai) and coffees, but they also do several hot snacks photo such as coxinhas (chicken rissoles), empadas (small pasties), and pao de queijo (cheese buns). Hot dishes such as feijoada are available on Saturdays.

On the grocery side, they have a reasonable range of items including dried and canned beans, manioc flour, pao de queijo mix, preserved hearts of palm, and jars of sliced souari nuts, as well as Brazilian brands of everyday items such as cereals, biscuits, instant coffee, soft drinks, soup mixes, and stock cubes. A chilled counter holds cheeses and cured meats.

Kake has visited several times, most recently in August 2017. Service has always been friendly and helpful, despite occasional language mismatches. In August 2016, a coxinha (£2) was of a good size, and had a well-flavoured and not-at-all-dry chicken filling enclosed within a soft but non-stodgy exterior. Another coxhina in August 2017 (now £2.10) proved that quality had been maintained.

Kake's verdict: It's a little tricky for the first-time visitor to find, but this is the first place I aim for when I'm passing through Stratford and need somewhere for a sit-down and a quick bite to eat.

Accessibility: No steps to enter. No customer toilet, due to the small size of the unit, but there are free (and step-free) toilets in the adjoining Stratford Centre.