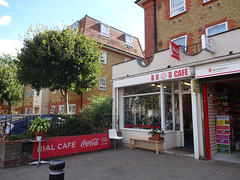 Cafe in West Ham, just across the road from the entrance to West Ham Station.

It's very small inside — a dozen customers would be enough to make it feel crowded. Plain white walls are set off by an eclectic collection of colourful artwork, and postcards dangle from the ceiling on bulldog clips, each embellished with a bright pink feather. The furniture is similarly eclectic, with tables including shiny round metallic cafe tables, a more substantial one with a Union Jack mosaic top, and one in the window made of sturdy varnished wood. Shelves are packed with art and design books, a dressmaker's dummy sports a smart dress and hat, and gladioli and basil plants adorn the tables. Jugs of filtered water sit on a sideboard, along with glasses for customers to help themselves.

Kake first visited on a Friday lunchtime in September 2016. There were four other customers when I arrived around 1pm, and a steady stream of takeaway customers during my visit. When I visited again on a Friday lunchtime in November 2016, there were only two other customers at 12:30pm, but more arrived while I was there, and by 1:15pm there were eight of us, meaning the place was quite full. The radio was playing on both visits, not too loud. Service was friendly and welcoming both times.

In September 2016 I had the vegetarian breakfast (£6) photo, which included mushrooms, two fried eggs, a hash brown, a sausage, two slices of tomato, beans, and two pieces of toast. The eggs were inconsistent; one had a nicely runny yolk but the other yolk was hard. The mushrooms were OK but tasted more boiled than fried. The vegetarian sausage was undistinguished — pink, salty, and not very interesting. The beans, tomatoes, hash browns, and toast were decent quality. Tea was charged separately, at £2.20, but served in such a nice cup (large but thin-walled) that it didn't feel too badly overpriced.

In November 2016, they'd had a large lunch order in shortly before I arrived, so were out of the tuna bake I wanted. I had one of their daily specials instead — chicken and bacon pasta (£6) photo. This consisted of fusilli in a creamy, mushroomy sauce with a generous quantity of chicken and plenty of well-crisped bacon. It was pretty tasty, aside from the overcooked peas sprinkled here and there (but at least there weren't too many of them).

Accessibility: A step to get in. It's quite small inside, and the tables are very close to each other. No customer toilets (and there are none in West Ham Station either).