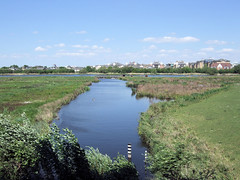 An area of South-West London lying within the London Borough of Richmond upon Thames, in the SW13 postal district.

Barnes's location, surrounded by the Thames on three sides, makes it seem somewhat cut-off from London proper (though there are plenty of train services to Waterloo from its two stations), and the extensive parklands (including the London Wetland Centre) surrounding the village-like area of shops at its heart affords it a certain exclusivity.

Auto-generated list of things in Barnes (view them on a map):