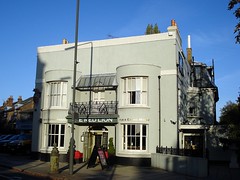 Fuller's pub in Barnes. It's a bit on the upmarket side, with dark wood decor, bare floorboards, worn rugs, arched ceiling, chandelier-style lighting, and a semi-open kitchen to the side of the bar.

Kake visited on a Friday afternoon in October 2008. When I arrived around 4:30pm, there were a handful of other people in, including one party with a baby in a pushchair. Piped music was playing (Heart of Gold, stuff like that), but it wasn't overly loud.

Fuller's Red Fox was £1.60/half, and they also had London Pride and two others (possibly including Discovery). There are two handpumps at each end of the bar, so I thought they only had two at first.

I suspect they do food all day, as the menus were out on the tables while I was there. The menu I saw had three choices of sandwiches priced between £5.50 (BLT) and £6 (chargrilled lemon chicken with tomato and avocado), plus light meals from £4 (soup of the day) to £7 (corned beef hash with fried egg), and mains from £8.75 (stuffed butternut squash with chestnuts, cheddar, and cabbage) to £16 (8oz ribeye steak with pink and green peppercorn sauce and handcut chips).

Accessibility: Ridge on the floor at the main entrance, but there's level access via the side door, plus an accessible toilet (standard toilets are also on the same level as the rest of the pub).