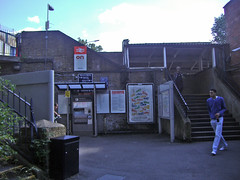 Zone 3 rail station in South-West London, on the Kingston Loop Line and the Hounslow Loop Line. Trains to Waterloo.

Note that because of its position on the two loop lines, not all Waterloo trains run direct; some of them go the long way (counterclockwise) around the Kingston Loop, via Richmond and Kingston, and some even go all the way around the Hounslow Loop via Hounslow and Richmond before returning to Barnes and then finally heading to Waterloo along the same route as the direct trains.

The direct trains run via Putney and Clapham Junction.