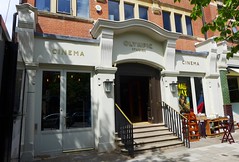 A cinema and cafe complex in Barnes, in a former recording studio (though before that opened in the 1960s it had been a cinema since 1910).

An upmarket boutique cinema with two screens, one entered on the ground level (but with steps down to the front of the screen) and another upstairs, which is larger and equipped with a Dolby Atmos sound system. All the seats are plush armchairs which recline slightly and have small tables beside each for drinks and snacks. Sound and picture quality are both exemplary, although tickets are priced to match (£15 as of June 2015, but £10 for matinee screenings Mondays to Thursdays). The larger cinema screen also offers double seats (at twice the ticket price), as well as double sofas and deluxe sofas (priced higher).

There is a refreshments counter ("sweet shop") by the upstairs cinema serving upscale snacks, popcorn, pastries, and drinks both alcoholic and soft. The cafe is a separate space with its own entrance alongside the cinema, with tables open to the streets, and serving a much wider range of food (which cannot be taken into the screens).