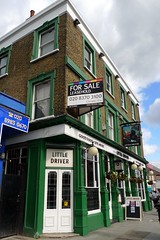 A nice pub in Bow, on Bow Road, near the DLR and Tube stations.

A decent venue, with a beer garden and heated seating in winter time, suitable for smokers who enjoy a cigarette with their beer. It is a fairly big pub, with some 10 odd tables inside and almost as many seats and bunks in the garden.

They serve food until 7pm daily, except Sunday when they have a Sunday roast until 4pm, which Chuck tried, and is fairly good. The staff are nice, and the clientele are mostly the area residents, between late twenties to early forties. Chuck also met the two friendly cats that live in the pub, Colin and Betty (though an anonymous commenter in July 2009 says the cats are actually called Colin and Tony, and are brothers).

Chuck's verdict: I live in the area and it's my local pub. I recommend it.