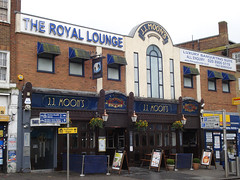 It's relatively large inside, and opens up towards the back with a higher ceiling and several exterior windows, making it less dim than the average shopfront Wetherspoons. Decor is traditional, with a patterned carpet on the floor, dark wood panelling beneath a dado rail, and framed pictures on the walls, though interest is added by a row of modernist lampshades hanging dramatically from the ceiling. There's also a couple of picnic benches out the front.

Kake visited on a Monday morning in November 2014. When I arrived a little before 11:30am there were about 20 people in, and a quiet buzz of conversation. No music was playing. Service was friendly and helpful.

There were five real ales on, only two of which looked interesting (Ringwood XXXX Porter at £2.15/pint and Nethergate GB at £1.99/pint). They also had a fridge full of craft beer. A half of lime and soda was the currently-standard Wetherspoons price of 55p.

According to the 2011 Good Beer Guide, they also do two ciders from polypins in the fridge (which is fairly normal for a Wetherspoons).

Accessibility: Step-free entrance via a small and slightly tight ramp. RADAR-locked accessible toilet on the level. Ladies' is up a half flight of stairs with a sturdy handrail.