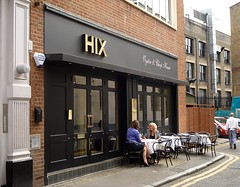 Hix Oyster And Chop House was a restaurant near Farringdon Station. It closed down in mid-2020 along with Mark Hix's other restaurants.