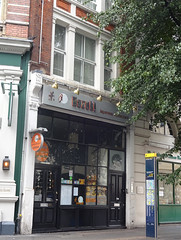 Hazuki was a Japanese restaurant on Chandos Place near Trafalgar Square. According to Google Street View, it closed down by April 2018. As of January 2020 the premises are occupied by a Chinese restaurant called Xi Home photo.

Getting here: The most convenient Tube station is Charing Cross Station. Come out of Exit 7, turn right, and when you reach the end of the road the restaurant will be directly ahead of you across the street.
Last visited by itsbruce and Jen, September 2011.
Last edited 2020-01-21 14:40:49 (version 10; diff). List all versions.