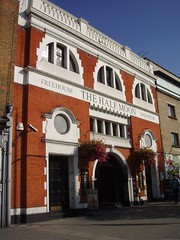 It has two bars; the front one is a bit old-man-dingy-Wetherspoons, but the back bar is light and bright, with interesting sort of Bayko-style decor in shades of beige, orange, and reddish-brown. The entire front wall of the back bar is made of glass, looking out onto the beer garden.

Kake visited on a Monday afternoon in September 2009. The place was pretty full when I arrived around 4pm, with a mix of older locals and students from the nearby Queen Mary campus. (It did quieten down a bit around 4:30pm.) No music was playing; instead, there was a nice buzz of conversation.

Six real ales were available; Ruddles, Marston Pedigree, Abbot Ale, Itchen Winchester, Barley Mow, and one other. They also had Marcle Hill cider. I just had a pint of lime and soda (ridiculously cheap, at 30p).

Food is served all day, and indeed there were a few people partaking of it on my visit, despite the odd hour.

Accessibility: Two steps up to get in at the front entrance, but there's level access via the beer garden. It's all on one level once you're in, and there's a RADAR-locked accessible toilet.