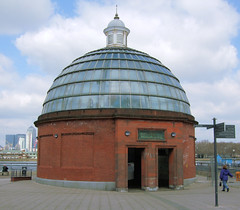 The Greenwich Foot Tunnel is a pedestrian tunnel running under the Thames between the Isle of Dogs and Greenwich. Although it's not too far from the Thames crossing provided by the DLR between Island Gardens and Cutty Sark, it's the nearest pedestrian crossing for quite some distance; the [Woolwich Foot Tunnel]? is a fair distance to the east along the river, and the Rotherhithe Tunnel is not only a good way away in the other direction, it's also thoroughly unpleasant to anyone who's not inside a hermetically-sealed motor vehicle.

The ends of the tunnel are marked by round dome-topped surface buildings (see photo). There are lifts as well as staircases (before the 2010-2012 refurbishment of the tunnel, the lifts were attendant-operated and only available at certain times of day, but now they're self-service).

Cycling is forbidden in the tunnel, but "coasting" with one foot on a pedal and the other dangling is apparently permitted, as long as you're not straddling the saddle.