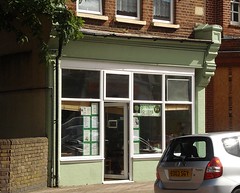 Small vegan/organic/fairtrade/hippy cafe on the High Road in Leytonstone. It closed in late 2010, and may have opened again briefly since, but as of January 2012 the website states that they are now an online magazine only.

The decor is clean and minimal, and large windows at the front let in the light. Two sofas face each other across a coffee table at the back of the room, while three cafe tables offer seats for another two, two, and four people respectively.

A refill station for washing-up liquid and other household cleaners is set up to one side of the room, and various organic/fairtrade groceries are displayed on the other side, next to a rack of organic wine. Sadly, the wine is only available to take home — they aren't licensed to sell alcohol for consumption on the premises.

Although all their teas are caffeine-free, they do serve coffee too. Soya milk (and only soya milk) is available for the hot drinks.

Kake visited on a weekday afternoon in August 2010. A cup of Earl Grey rooibos (£1) was fine, and a slice of vegan chocolate cake (around £2) was beautifully presented, decorated with dark chocolate buttons and a scoop of vegan ice cream photo.

The savoury menu may change, but on this visit it was reassuringly short (a sandwich, a soup, a curry, beans on toast) and all vegan.

Accessibility: No steps to get in (just a small ridge). The toilet is around the back of the building, and you have to go out, around, and down a narrow passageway where the ground is a bit uneven. The cubicle is narrow too.