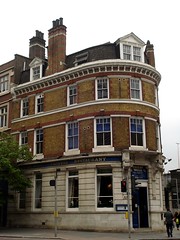 Now closed; was a Chinese restaurant on Tooley Street in Bermondsey.

As of April 2015 it's due to reopen as a branch of Chilango.

It has around three large round 8-person tables with lazy susans, and seating for around 20 more at smaller rectangular tables.

secretlondon and colleagues visited on a Friday lunchtime in June 2009. Most of us had the set lunch, which was £7.50/head for one course — a choice of a variety of mains with rice or noodles. One colleague had chow mein from the main menu (also £7.50). secretlondon's food was fine but had quite a lot of chillis in. Two colleagues had lemon chicken, which we reckoned tasted like lemon curd; it was very sweet. A 10% service charge was added to the bill, and when we asked (out of interest) if we had to pay it, the manager came out and told us it was compulsory.

bob and friends visited again on a Friday lunchtime in December 2012. There was only one place set at the table when we sat down, and we had to keep asking for more crockery as more of our party arrived. Grilled Peking dumplings had wrappers that were perhaps rather too thick. Crispy shredded beef photo was pretty good, and bob would order it again. Spicy smoked chicken photo was OK though a touch salty. Crispy duck was OK but not outstanding. Deep-fried aubergine with spicy salt and pepper was quite nice. Mapo tofu photo wasn't very good; not spicy at all, and quite gloopy.

bob's verdict: It was OK for an Anglicised Chinese restaurant. I wouldn't go back on purpose, but if someone insisted we did then I'd certainly order the crispy shredded beef again.

Child-friendliness: On our December 2012 visit there was only one highchair available, and it was a fairly large one, so not suitable for younger babies.

Accessibility: Two steps to get in. Some of the seating is on a dais. There's not much space between the tables. The loos are in the basement, down a flight of stairs.