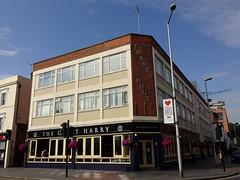 A Wetherspoons pub in the centre of Woolwich, on the other side of the main square from Woolwich Arsenal Station. It was burnt out during rioting on 8 August 2011, but reopened in July 2012.

There's not much to distinguish this Wetherspoons from any other, except perhaps that it feels somewhat smaller. It's still got a large open floor area in front of the bar with plenty of seating, though this was mostly full on a rainy Saturday afternoon when Ewan visited. There's a smaller area for families around the corner, which, if you don't mind bawling babies, is a more pleasant place to sit.

The usual good value prices dominate, and plenty of handpulls for ale. On our September 2008 visit the ales on handpump were Pedigree, Spitfire, Abbot Ale, Courage Best, Bateman's Summer Swallow, and Duchy Organic Ale, as well as Weston's Vintage Cider. House wine was also decent, and cheap as well.