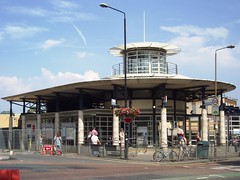 Zone 4 rail station on the North Kent Line and the Thameslink route via Dartford.

It's also the terminus of a DLR branch. Prior to January 2009, this branch of the DLR terminated one station earlier, at King George V. The new extension opened on Saturday 10 January 2009, with the official opening on Monday 12 January. There is a separate DLR station entrance around the corner from the mainline rail station, on Beresford Square photo, although the two stations link up via an underground passageway.