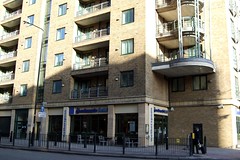 Kake and friends visited on a Thursday afternoon/early evening in June 2015. It was fairly empty during the afternoon, though there were a few people in having food. It started filling up around 5:15pm but there were still plenty of free tables when we left around 7:30pm.

There are ten handpumps on the bar, in two somewhat-hidden banks of five each, and as is fairly standard in Wetherspoons these are divided into fairly standard choices and more interesting ones.

Accessibility: No steps to get in, step-free to RADAR-locked accessible toilet, bar, and all seating. Other toilets up a step.