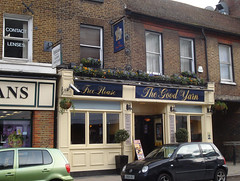 Entry is into a seating area, with a flatscreen to one side. A little further back, a row of booths runs along the wall opposite the bar. Each booth has a little natural light coming in via small windows (which have interesting etchings of stylised scissors photo, but also overlook the trade waste bins in the alley alongside). It's a fairly typical Wetherspoons shop conversion at this point; long, narrow, low-ceilinged, and dimly lit.