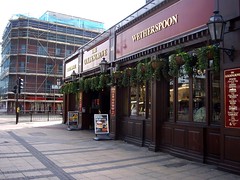 Wetherspoons pub in Stratford, a short walk from Stratford Station. Sometimes called the Golden Grove, but the sign on the frontage and the Wetherspoons website both call it the Goldengrove.

It has a large single bar, with seating on a couple of levels. There's a small, paved, partially covered beer garden out the back.

There are six handpumps, which on Kake's March 2012 visit (during the Wetherspoons beer festival) were dispensing four interesting real ales (£2.10–2.40), Ruddles, and a real cider.

Accessibility: Step-free access to all parts of the pub, including the beer garden, though access to the bar is via a ramp which can be difficult to get to when the place is full. The cubicles in the ladies' loos are a bit of a squeeze to get into, but there's also an accessible toilet (at the back by the beer garden).