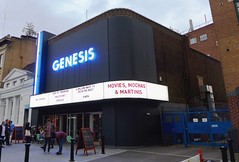 This cinema has seen a great amount of change over the early years of the 2010s, and is now very much more marketed to a more affluent upmarket gentrifying population. It shows a good range of mainstream and accessible arthouse releases, and does ticket deals on off-peak days like Monday (check the website for current offers).

Inside, the old ticket hall area has been opened out, with a ticket desk to the right of the entrance as well as a small coffee and snack bar. The rest of the foyer is taken up with comfortable cafe seating and tables and a velvet rope through which the snacks kiosk, bar and auditoriums can be reached. The focus of the foyer are the colourful lights showcasing the grand staircase that sweeps up to the first floor.

There is a large licensed bar on the first floor which also does food, although the beer range is rather limited (aside from a few Meantime bottled beers). Seating is very comfortable in here. There's also the 'Studio Five' screen which has its own bar and is marketed as a more upmarket option for cinema watching, somewhat more akin to the Everyman chain in level of comfort (and, therefore, price).

There are five screens overall, and the main auditorium still has a proper old-fashioned proscenium arch and a 'stage' area rather oddly barred off from the seating. There are seats in front of the central entry passage as well as a steepish rake up to the rear and over the entrance. In Ewan's opinion, this auditorium still retains some of the old nostalgic glamour of the picture palace.

The other screens are downstairs, very much smaller affairs with functional seating.

Overall, this is an increasingly pleasant and enjoyable cinema to spend time in. A good balance has been struck between quality films, keen pricing and comfortable bar and cafe areas.