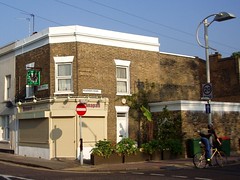 South Indian restaurant tucked away on a side street off Rye Lane in Peckham. It also has a takeaway branch on nearby Maxted Road.

It's very small (seats maybe about 35?) and popular, so it's best to go early or book. Note that they're not open on Mondays; and on Saturdays they have 2 sittings for dinner: 7:15pm and 9:15pm. It's very much not a standard curryhouse; the menu changes every six weeks, they don't do "X meat in Y sauce" type dishes, and meals are served plated up rather than in serving bowls for people to share around.

Kake and bob visited on a Tuesday evening in February 2008. We hadn't booked, but they managed to fit us in. It was a little after 7pm when we arrived, and there were already several other customers; an hour later the place was entirely full.

We started with poppadoms and chutneys (£3.50) photo. The chutneys were home-made and much nicer than the usual varicoloured slop you get in standard curryhouses; a fresh-tasting tomato puree, a pungent heap of slightly softened garlic slices in a spicy sauce, a smooth green puree with a chilli kick, and a tangle of shredded beetroot. (Note: some of their chutneys/pickles are available for purchase in jars.)

Next, Bob tried the meat thali (a choice of chicken or lamb, both £13) and Kake the fish thali (also £13) photo. Both were served in several small metal bowls with a heap of rice on top of a banana leaf, and it turned out that they were identical apart from one dish. We both got rasam (a thin, spicy soup), dhal, a wet vegetable curry, a dry mung bean curry, raita, and a couple of relishes. Bob had in addition a lamb curry which he seemed to rather like, while Kake had a tasty, smoky fish dish made with firm-fleshed fish in a thin spiced gravy. (A vegetarian thali is also available, at £12.)

It was all pretty good; none of it stodgy or greasy. Nothing was mind-blowingly delicious, but it was a great, simple, no-nonsense meal. We finished with a plate of Indian sweets (£2.50) photo for Bob, and a mint tea (£1.80) for Kake. Both were very tasty. We also got a piece of their chocolate, chilli, and cardamom cake to take home for doop, who adds: the chocolate cake is unbelievably good. Perfectly moist without being too dense or soggy, there's enough chilli involved to give it a decent fire (although you can remove it if you prefer), and the cardamom balances it beautifully. I am beyond merely liking or disliking it, and in some advanced state of chocolate cake enlightenment.

We accompanied our food with a bottle of Indian Zinfandel (£13), which was perfectly fine. (They also offer a number of beers from the Meantime brewery, which is based fairly nearby in Greenwich). Poppadoms and chutneys, two thalis, a bottle of mineral water, a bottle of wine, a plate of Indian sweets, a piece of chocolate cake, and one mint tea came to £60 including a 10% tip (automatically added to the bill).

Kake and Laura visited again in June 2009, in the company of bellaphon and MsMarmiteLover. We went a la carte this time, and ordered various dishes to share; although the normal mode of operation here is for each person to get their own plated meal, they were happy to bring us extra plates and let us eat family-style. Indeed, the service was extremely friendly and accommodating throughout.

For starters photo, we shared masala dosa (thin, crisp pancake stuffed with seasoned mashed potato and served with chutneys and a thin curry known as sambar; £5.50), "vegetarian street snacks" (deep-fried potato balls and lentil cakes, £4.50), thaire vadai (another type of lentil cake, soaked in a yoghurt sauce, £4.25), and crab thoran (stirfried fresh crabmeat with curry leaves and other spices, £5.25). The masala dosa was quite substantial (this dish is normally a light meal in itself), and would possibly be too much as a starter for one, so a good thing we were sharing!

Of the main courses, Kake's favourite was perhaps the jeera chicken (£11), served as a whole chicken leg on the bone with plenty of flavour and not dry at all. Nagore lamb kurma (£10.75) was light-years away from the standard curryhouse rendition, with a rich, complex flavour and tender meat. Baypore squid curry (£10) was a bit of a let-down, though; the squid had a rather odd texture reminiscent of cooked egg white, and a very muted flavour. All main courses come with rice, and at Laura's suggestion we asked for a couple of the rice portions to be substituted with curd rice, which only cost an extra 50p/portion and turned out to be a very good idea.

Kake's verdict: I would very happily come back, though this is partly influenced by the fact that the journey here is quite easy for me (P12 bus practically door to door).

Getting here: Holly Grove leads west off Rye Lane just to the north of Peckham Rye Station. The street looks unpromising to start with, being very residential-looking. Persist! Ganapati is about 200m further down, on the corner of Holly Grove and Bellenden Road.